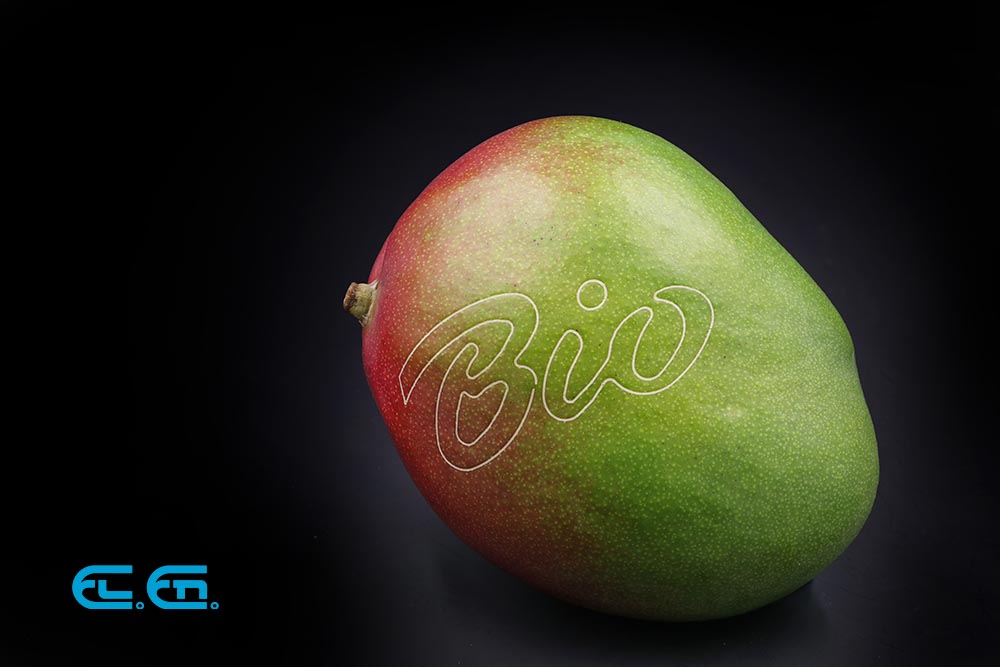 Laser etching of various pieces of information on fruit, vegetables and other food products is an innovative procedure that is replacing traditional methods otherwise used in the field. A CO2 laser can not only etch alphanumeric codes and barcodes, but also any type of graphical representation.

This versatility can easily makes it possible to replace traditional methods such as hot-marking, inkjet printing and adhesive labeling. CO2 technology also guarantees huge savings in terms of speed and resources. Because of the previously mentioned reasons, there has been a growing interest in laser marking of food products.

In this article we will present a general overview of laser labelling for food. We will show its main fields of application, the advantages it delivers to both the production process and the environment, the way it works and the technologies employed. 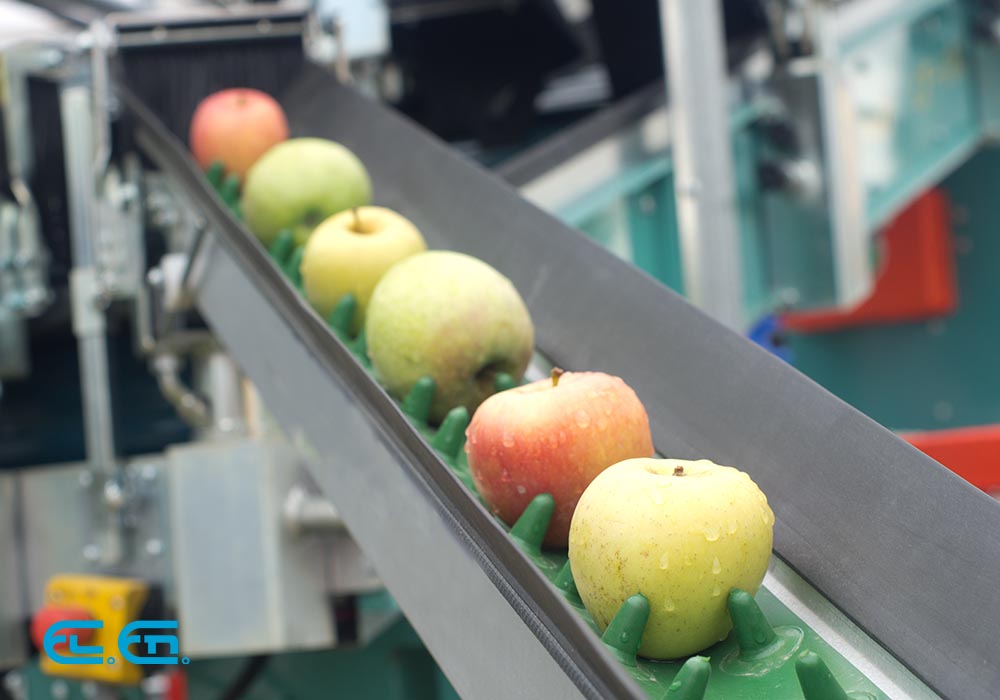 Food products make large use of codes, labels and other varying symbols. They serve many purposes: guarantee the safety of consumers, trace products through the various steps of the supply chain and fight the counterfeiting of products. Here is some of the information you can find on products:

This information can be applied to the product in different ways:

The use of lasers in the food industry isn’t new. Production technology has long discovered the potential of this tool. Its use centered around process control (for example, reading barcodes), bio-stimulation of produce or disinfection of products through laser with ultraviolet wavelength.

The method of laser markings on produce to replace labeling has been known for several years. The first patent dates back to the end of the 90s. This process hasn’t yet become widespread though. The high cost of laser equipment combined to the lack of specific knowledge about the process has made most producer continue using traditional methods which are quite fast and inexpensive compared to laser. 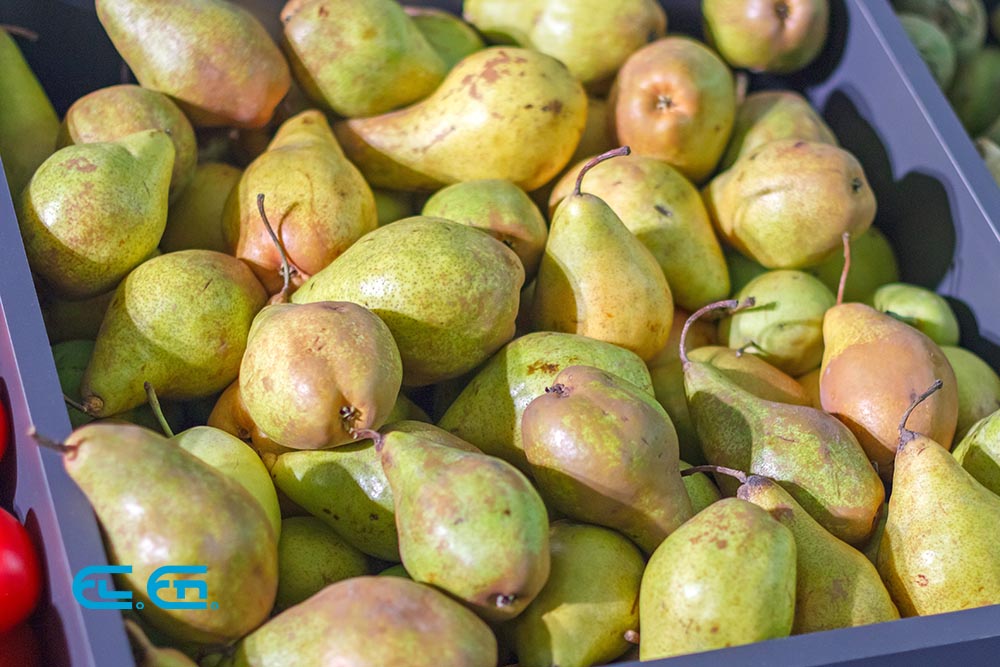 In recent years, interest in laser technology has grown to the point that it is no longer only within the purview of specialists. Some famous companies in the produce sector have chosen to adopt direct laser labeling of their products. Many factors explain this shift from traditional labeling techniques to natural branding. The cost of laser technology has gone down in recent years while the demand for natural and organic products has risen. Companies strive to optimise resources and reduce the ecological footprint caused by their production.

The fact that European institutions have dedicated resources to this technology is a clear sign that this process has its advantages. In 2010, a European project for environmental innovation has explored the possibility to replace the adhesive labels on fresh produce with laser markings directly on the surface of the produce.

This technique focuses mainly on the labeling of fruit and vegetables but isn’t its only application. Aged cheeses can easily be marked by laser. In a recent article, we have discussed how laser systems can be used to engrave cheese wheels with identifying signs.

Another type of application mentioned in this blog is the laser impression of codes on eggshells. Tracing codes, expiry dates and laying dates are different pieces of information printed on eggshells. This data is fundamental to protect the health of consumers. Ink printing is the traditional method used. Laser impression efficiently replaces inkjet printing and makes it possible to avoid food products coming into contact with chemicals such as ink. 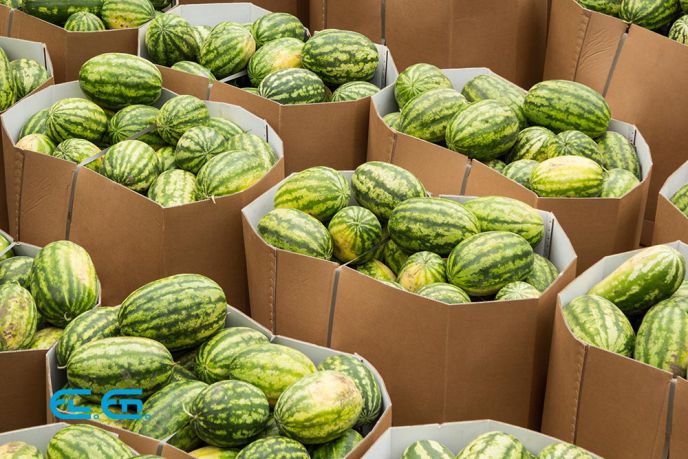 Laser markings can be done on a wide range of elements. Generally, the best results can be obtained on produce with some type of skin, be it thick like the avocado’s, or thin like the tomato’s. Up to now, laser markings have been successfully carried out on different types of produce. Here is a partial list:

The advantages of laser labeling

Laser’s most renowned characteristic is speed of execution. A laser source integrated in a system with a conveyor belt can mark batches of around ten items a minute.

Thanks to numeric control, it is possible to etch characters, codes and images in high resolution on the surface of products without leaving any type of residue. This characteristic makes it easy to ‘print’ QR codes, barcodes or complex logos.

Laser technology’s innovative characteristic is its versatility. A simple reprogramming of the laser control software is all that is needed during production to switch from one application to another.

The use of many potentially polluting materials can become obsolete if replaced by laser marking. Plastic or paper labels, glue and ink can all be eliminated through the use of laser labeling. This would generate an important reduction of the ecological footprint. The products would then become less harmful for the environment or for the people that consume them.

Laser markings are applied directly to the surface of the product and are therefore impossible to erase and difficult to counterfeit. This technique is perfect for products with symbols that guarantee their origin or quality. 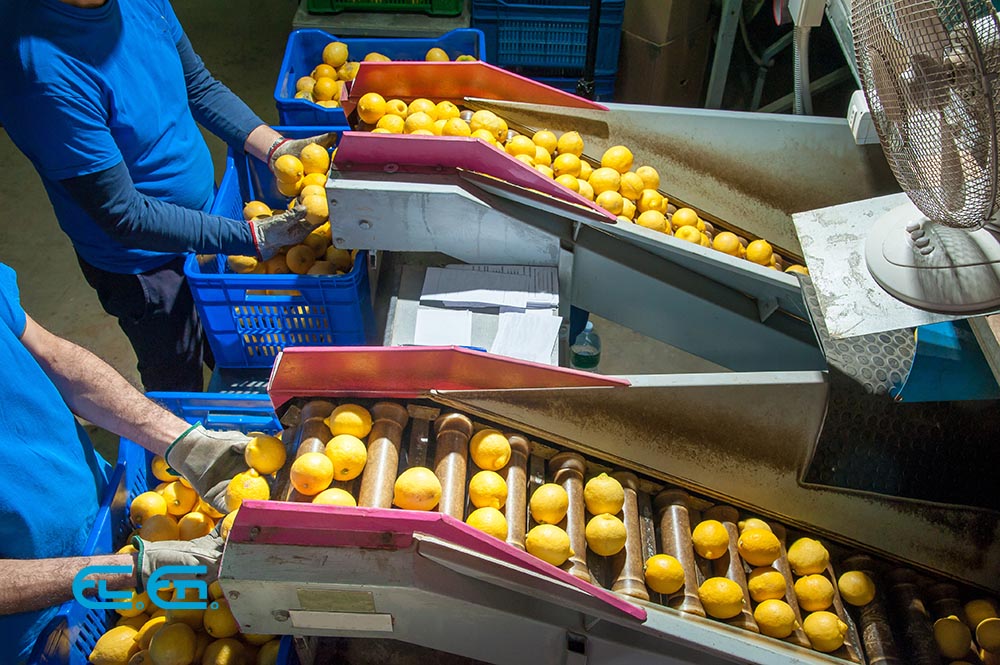 Laser labeling is under the wider umbrella of laser marking, a process with multiple fields of application. Laser marking consists in the removal of a thin layer of the material’s surface. This delayering is caused by a thermal process triggered by the laser beam’s energy.

When the laser beam reaches the intended surface, it makes the temperature of the material rise until it causes its sublimation (the instant passage from solid state to gaseous state).

The removed material creates a well defined contrast between the untouched surface and the one marked by the laser beam. This process is renowned and used in many sectors on materials that aren’t destined for food consumption. 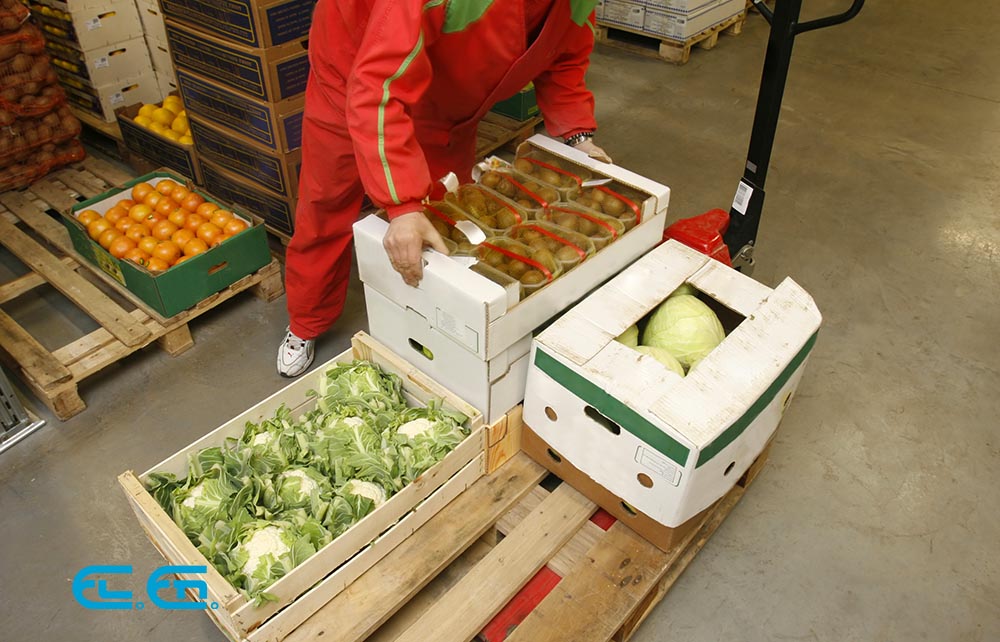 A laser system for food labeling is mostly identical to any other laser marking system. The fundamental components are:

The design for the machine layout will naturally depend on the type of plant, processes and product used. A company that distributes and commercialises apples will need a different configuration to a company that does laser markings on cured meats.

Nonetheless, both machines will need a laser source, a scanning head that moves and focuses the beam on the surface of the object and a software connected to the control unit that constitutes the interface between the user and the system.

Let’s go over the characteristics these components need to efficiently carry out laser direct food labeling.

Among the laser sources available on the market, CO2 lasers are the ones that show the best results when it comes to the absorption of organic material. These materials can efficiently absorb the infrared wavelength (10.6 micrometres) of a CO2 laser source because of their low thermal conductivity.

A laser source capable of keeping the laser’s parametres stable is fundamental in laser marking applications. This will guarantee a result with high levels of precision. In order to achieve this, the laser medium must remain in optimal conditions.

Sadly, it isn’t always possible. In the case of the CO2 laser, the medium is made of a gas mixture, of which the biggest part is carbon dioxide. Over time, the continuous leak of gas molecules makes the ones still present in the resonance cavity thin out. This causes a gradual degradation of the laser beam’s parameters.

Mutations of the laser beam will show through a lowering of work quality. Maintenance from the producing company is usually the only way to go back to the laser’s original parameters, but it means putting the production on hold and therefore increasing costs.

In order to avoid this inconvenience - which is typical of all CO2 lasers - El.En has created a autonomously rechargeable CO2 laser source. Because of this characteristic, El.En’s laser source can maintain the fundamental parameters of the laser at an optimal level.

Laser marking on produce doesn’t require such a great power. Nonetheless, the power of the laser source will have a direct influence on the speed of production so it is something to consider.

Every laser marking application needs a scanning head to operate. We have already seen in previous articles how a laser source works and what use it has. A laser scanning head’s function is to move the laser beam on a pre-established path that coincides with the processing of the goods.

A laser beam is a light ray that goes in a straight line until it reaches an obstacle of some kind. If a laser beam doesn’t get deviated in some way, it cannot be used in production. The laser scanning head’s job is to deviate the laser beam, making it follow a pre-established path.

The scanning head uses galvo mirrors to move the laser beam along the X and Y axes of a work area.

To function properly, the laser beam has to always be well focused on the surface of the processed product. A z-linear lense will increase and decrease the focal length of the lense and maintain the laser exactly where it needs to be.

The laser source and scanning head have to work in tandem. The laser’s position, focus, power and the duration of the beam have to be decided according the requirements of the production.

The software and control unit are responsible for the coordination of all these devices. The software is the interface between the machine and the user. It translates the patterns needed for production into coordinates and parameters that the control unit sends to the scanning head and laser source.

A change of the software’s parameters or the insertion of a new CAD file makes it very simple to engrave any type of information. 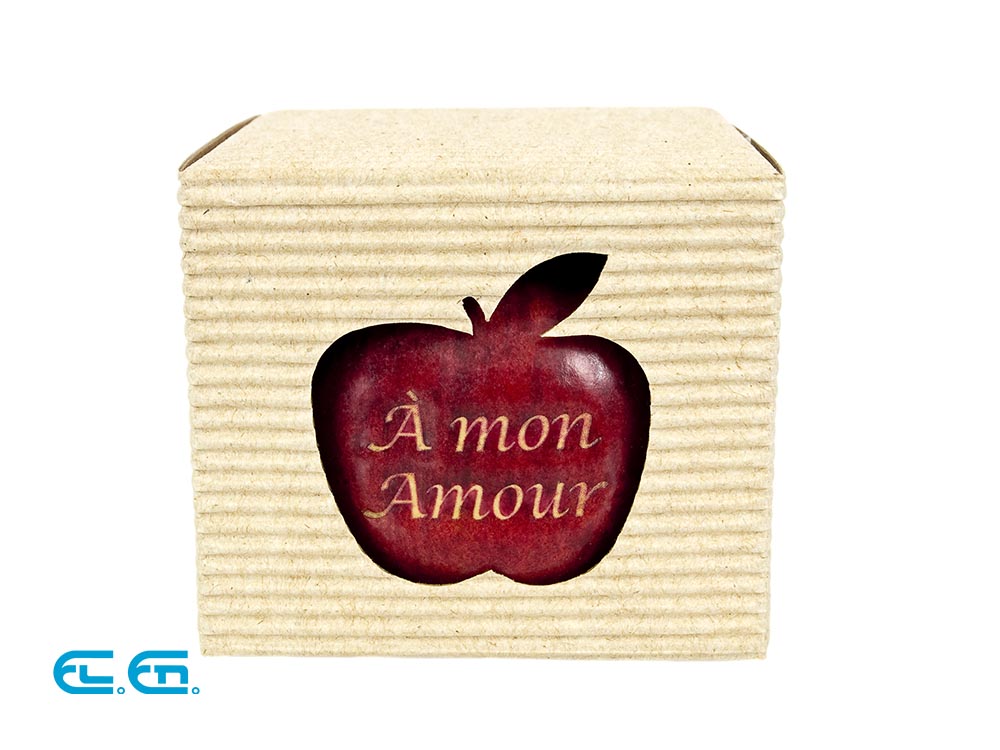 When considering the use of laser technology, some people fear it might alter the shelf life of their produce. The skin does protect from mold, bacteria and other agents that could damage its organoleptic properties making it unsafe for consumption.

In the case of cured meats or cheese, the risk is minimal since the external crust is very thick. The laser markings only go a few microns deep and are much less invasive than the ones done with traditional methods such as firebranding.

Things could have become more problematic with fresh produce, especially fruits and vegetables with a very thin skin like tomatoes or grapes. The fear was that removing a layer of skin (however thin) would cause dehydration and various types of contamination.

In reality, many studies have shown that laser marking only touches the surface of the product and doesn’t provoke any alterations. The protective function of the skin isn’t compromised and the shelf life remains the same.

The organoleptic properties also remain unaltered and we can positively say that laser labeling doesn’t alter the flavour of produce in any way.

A world to explore

Laser marking for food products is a new world just waiting to be explored. Each product has different qualities and the parameters used should change accordingly. It is therefore fundamental to study a tailor made solution with the help of a laser producer.